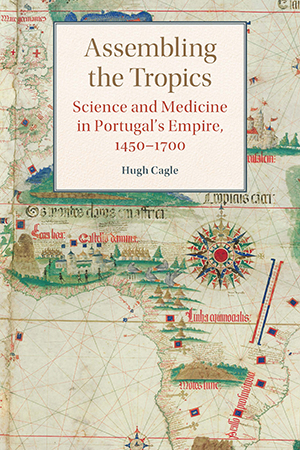 Professor Hugh Cagle, Director of International Studies, has published a new book, Assembling the Tropics, which explores the intersection of science, culture and politics in Portugal’s empire and sheds light on little-known connections between Asia and the Atlantic World.

In consideration of this recent publication, we have asked questions about this most recent project.
(1)  What inspired the idea for this publication?
I was struck by just how ubiquitous is this idea that the tropics are a coherent, internally consistent, global region--that we envision the so-called "tropics" in this way even though we also know that this vast swath of the globe is actually incredibly diverse in human, environmental, climatic,  and epidemiological terms. I wanted to know how that contradiction came to be so. This idea of "the tropics" turns out to be more complicated than we usually admit. Really, it's a fabrication--an invention!

(2)  Are there situations or themes highlighted in the book that are relevant in society today?
Well, yes, absolutely!  The most basic takeaway is that every single thing about the world we live in today--including the scientific concepts that we so often take for granted and which we might assume are self-evident--actually have a history.  That's the big idea. Even basic scientific concepts (facts!) have histories, which means that they are part of the cultural world that produced them. They are not simply a reflection of the world around us.

(3)  How can students in particular benefit from this book?
We live in a time in which it seems like science and technology pervade our lives like never before, and a time in which it seems like the authority of people who create science or make technologies have tremendous power and authority. And yet many people--including people all along the political spectrum (not just conservatives or liberals, republicans or democrats)--are distrustful of that kind of influence. For reasons that are entirely understandable, many people feel threatened by that authority. Unfortunately, for some folks that leads to dangerous consequences--like outright refusing to recognize climate change, or water and soil pollution. Of course, the outright dismissal of expertise isn't going to do anyone any good. What I try to do here is offer students an example of how to investigate and critique the claims of science in a responsible way.

That's really what's at stake: how can we critique the power and authority of science without ignoring the value and utility of its insights? I show how we can do that using the example of this idea of "the tropics."

Important for Spring 2019: students can learn more about how to critically engage with science by taking a new course that Hugh has created. It's called "Science and Society" (HIST 4075). It'll be offered for the first time under an older title, "Intro to the History of Science," but really it's the same course. The title just hasn't been officially changed yet.