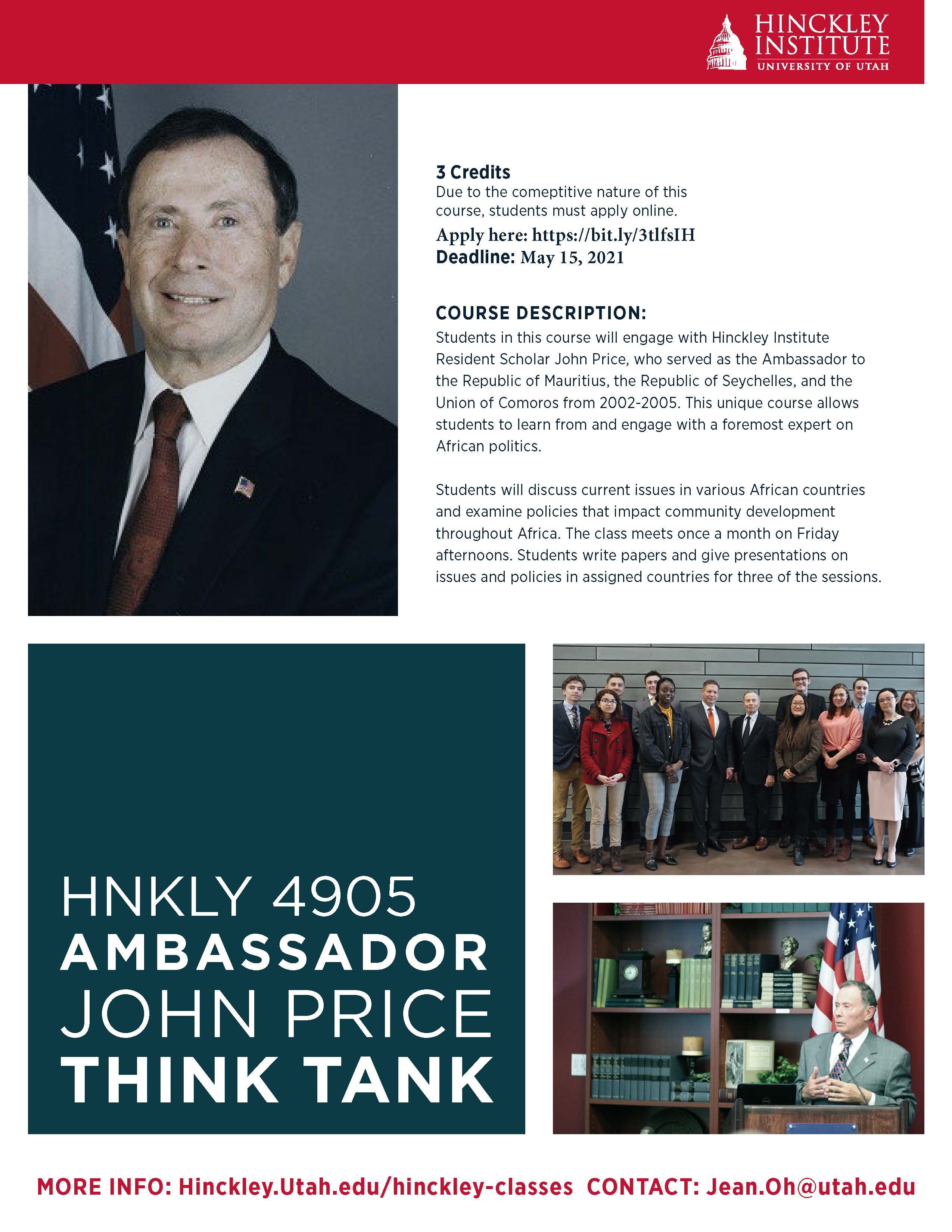 Students in this course will engage with Hinckley Institute Resident Scholar John Price, who served as the Ambassador to the Republic of Mauritius, the Republic of Seychelles, and the Union of Comoros from 2002-2005. This unique course allows students to learn from and engage with a foremost expert on African politics.

Students will discuss current issues in various African countries and examine policies that impact community development throughout Africa. The class meets once a month on Friday afternoons. Students write papers and give presentations on issues and policies in assigned countries for three of the sessions. 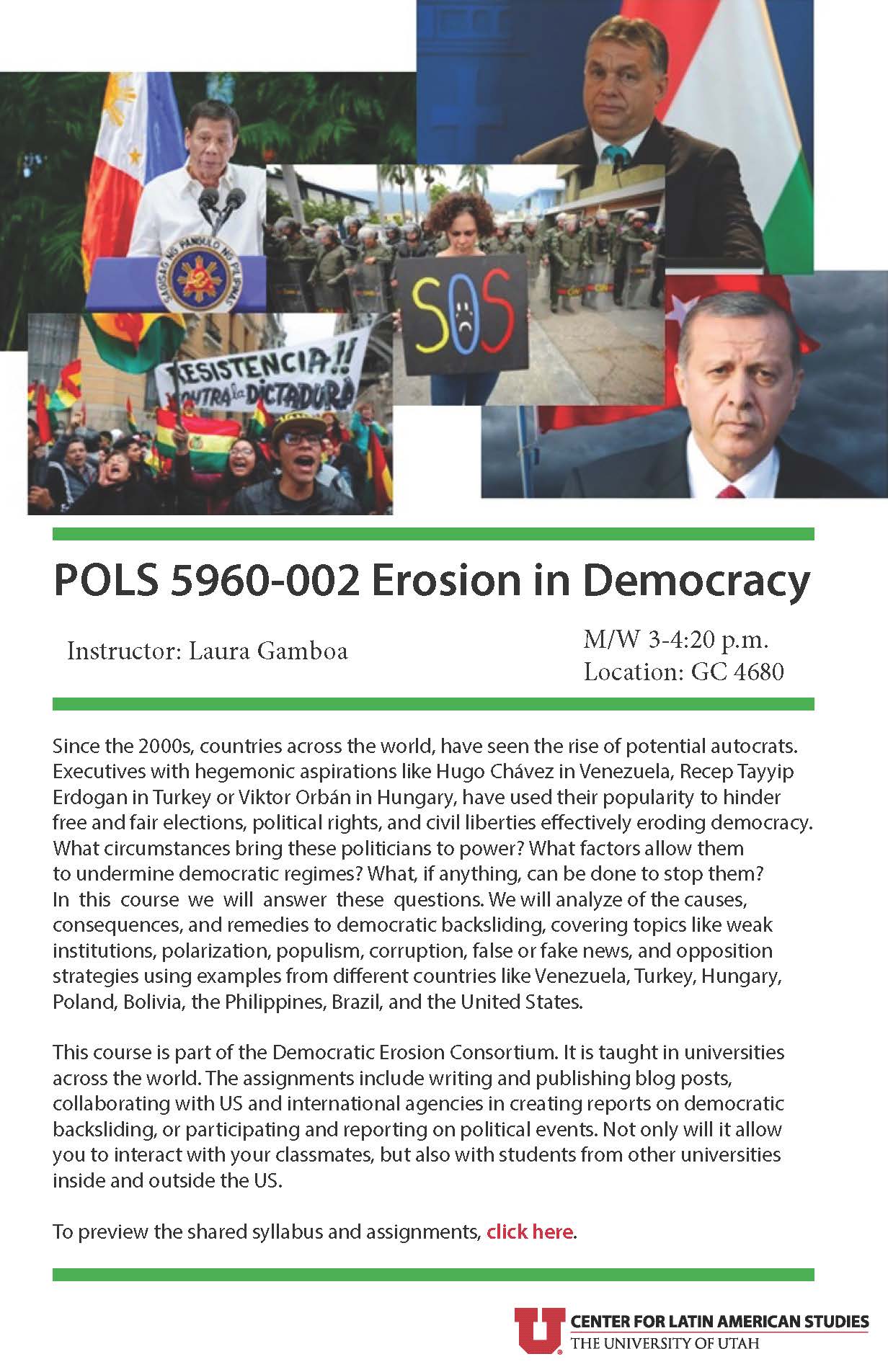 Since the 2000s, countries across the world, have seen the rise of potential autocrats. Executives with hegemonic aspirations like Hugo Chávez in Venezuela, Recep Tayyip Erdogan in Turkey or Viktor Orbán in Hungary, have used their popularity to hinder free and fair elections, political rights, and civil liberties effectively eroding democracy. What circumstances bring these politicians to power? What factors allow them to undermine democratic regimes? What, if anything, can be done to stop them? In this course we will answer these questions. We will analyze of the causes, consequences, and remedies to democratic backsliding, covering topics like weak institutions, polarization, populism, corruption, false or fake news, and opposition strategies using examples from different countries like Venezuela, Turkey, Hungary, Poland, Bolivia, the Philippines, Brazil, and the United States.

This course is part of the Democratic Erosion Consortium. It is taught in universities across the world. The assignments include writing and publishing blog posts, collaborating with US and international agencies in creating reports on democratic backsliding, or participating and reporting on political events. Not only will it allow you to interact with your classmates, but also with students from other universities inside and outside the US. 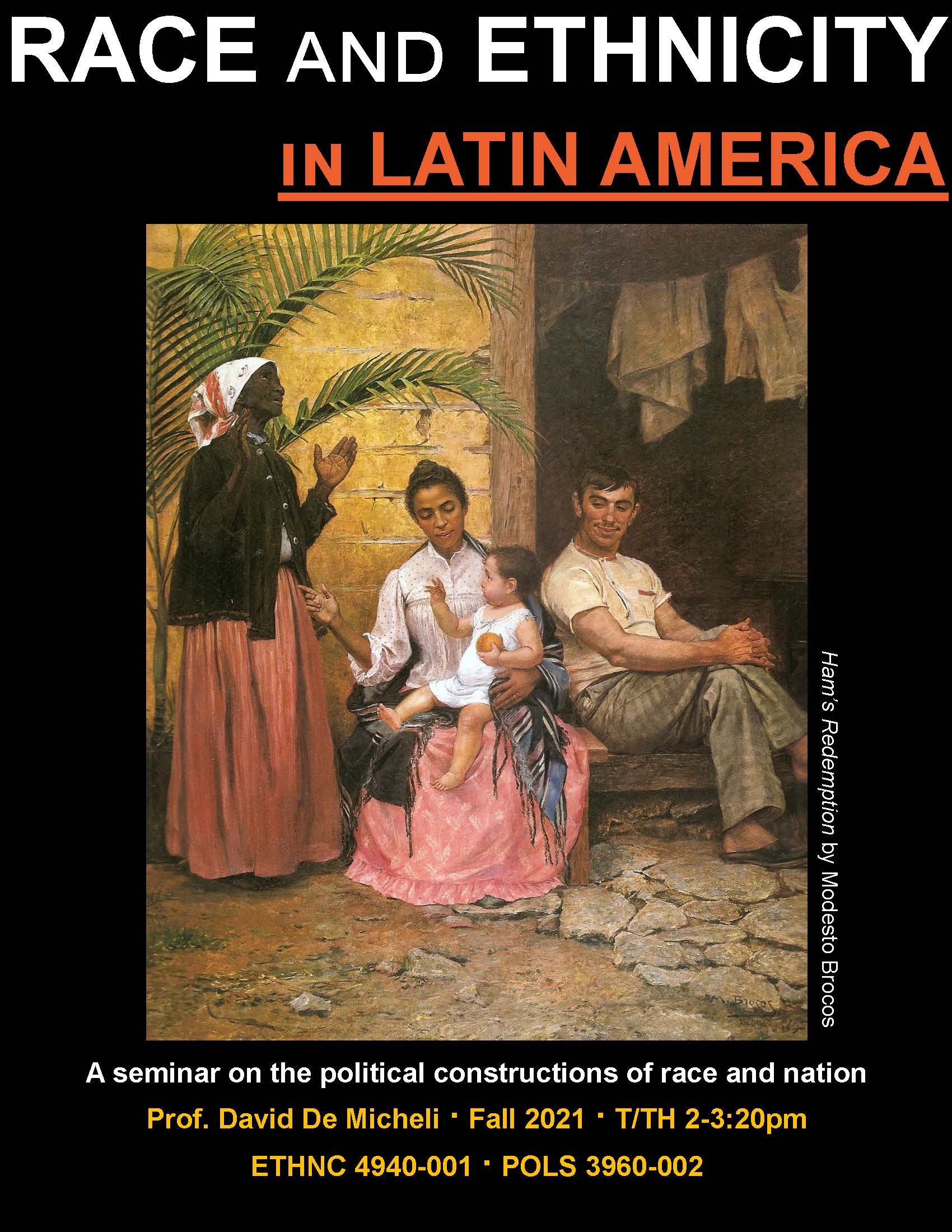 Race and Ethnicity in Latin America

Instructor: David de Micheli
Days: Tuesday/Thursday
Time: 2-3:20 p.m.
Location: GC 4020
This course will focus on the historical constructions of race and ethnicity in Latin America and its consequences for understanding contemporary politics and society. We will follow the historical evolution of these ideas and concepts as social constructs, tracing their origins and variations in Mexico, Brazil, the Andes, and the Caribbean, to name a few. We will also examine the social and political forces (domestic and international) that shaped evolving conceptions of ethnicity and race—and ultimately nationality—in the Americas. We will conclude with the modern period, considering how this region of the world once deemed exceptional for its celebration of race mixture and colorblindness transitioned to one that promotes affirmative action policies and contends with growing ethnoracial mobilization in variety of social and political domains. 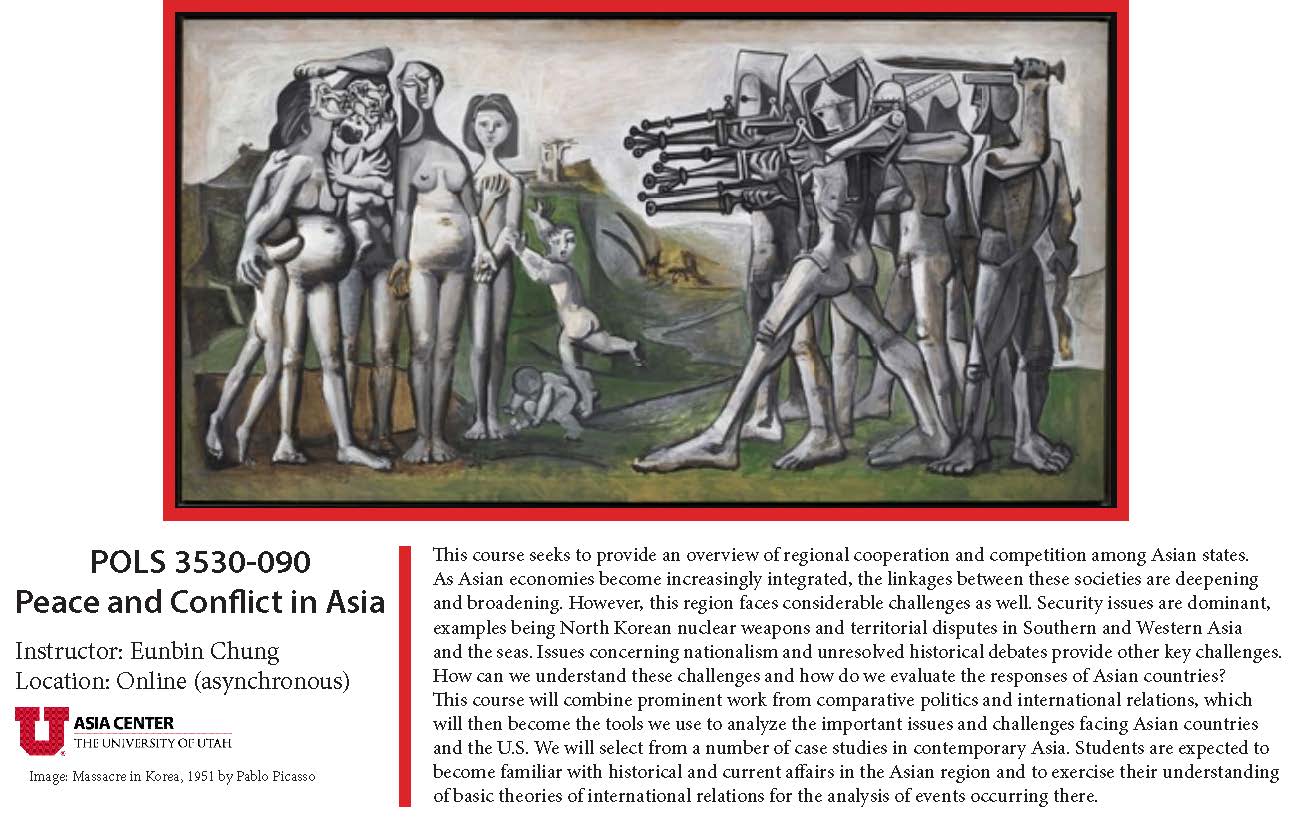 Peace and Conflict in Asia

This course seeks to provide an overview of regional cooperation and competition among Asian states. As Asian economies become increasingly integrated, the linkages between these societies are deepening and broadening. However, this region faces considerable challenges as well. Security issues are dominant, examples being North Korean nuclear weapons and territorial disputes in Southern and Western Asia and the seas. Issues concerning nationalism and unresolved historical debates provide other key challenges. How can we understand these challenges and how do we evaluate the responses of Asian countries? This course will combine prominent work from comparative politics and international relations, which will then become the tools we use to analyze the important issues and challenges facing Asian countries and the U.S. We will select from a number of case studies in contemporary Asia. Students are expected to become familiar with historical and current affairs in the Asian region and to exercise their understanding of basic theories of international relations for the analysis of events occurring there. 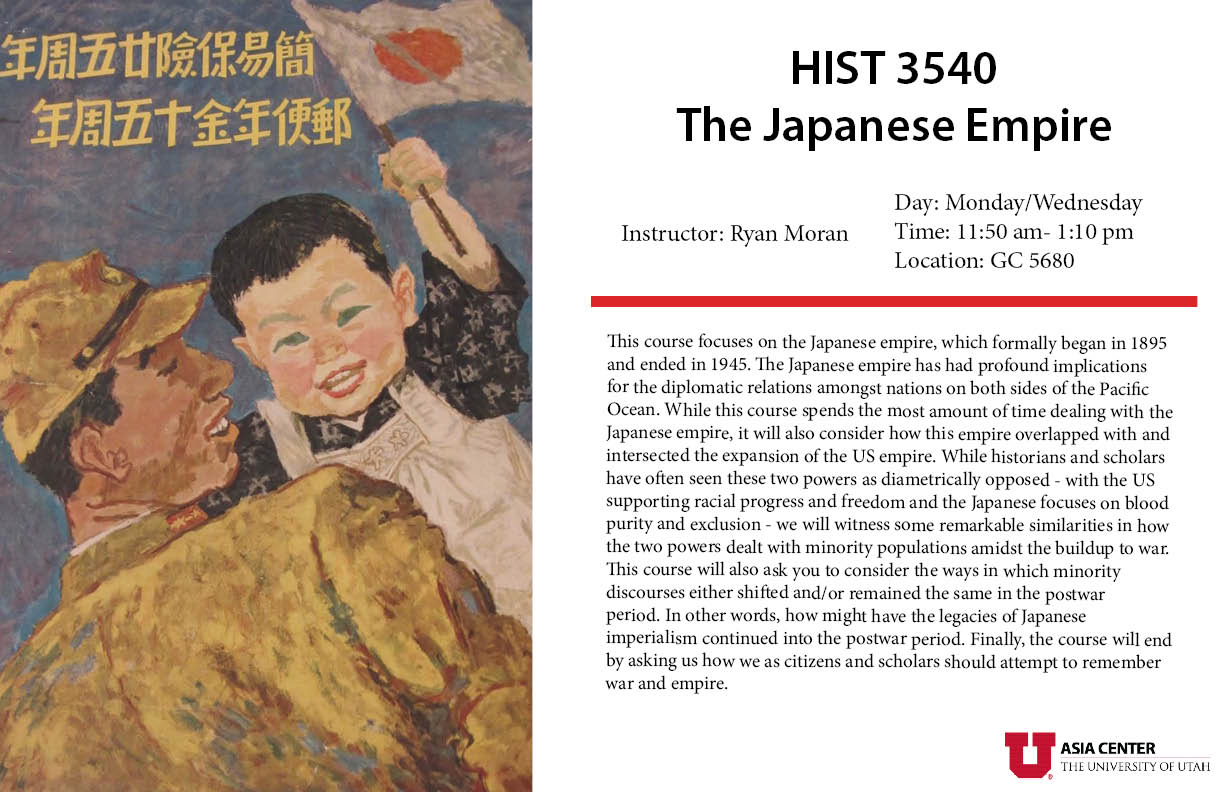 Instructor: Ryan Moran
Days: Monday/Wednesday
Time: 11:50 am- 1:10 pm
Location: GC 5680
This course focuses on the Japanese empire, which formally began in 1895 and ended in 1945. The Japanese empire has had profound implications for the diplomatic relations amongst nations on both sides of the Pacific Ocean. While this course spends the most amount of time dealing with the Japanese empire, it will also consider how this empire overlapped with and intersected the expansion of the US empire. While historians and scholars have often seen these two powers as diametrically opposed - with the US supporting racial progress and freedom and the Japanese focuses on blood purity and exclusion - we will witness some remarkable similarities in how the two powers dealt with minority populations amidst the buildup to war. This course will also ask you to consider the ways in which minority discourses either shifted and/or remained the same in the postwar period. In other words, how might have the legacies of Japanese imperialism continued into the postwar period. Finally, the course will end by asking us how we as citizens and scholars should attempt to remember war and empire. 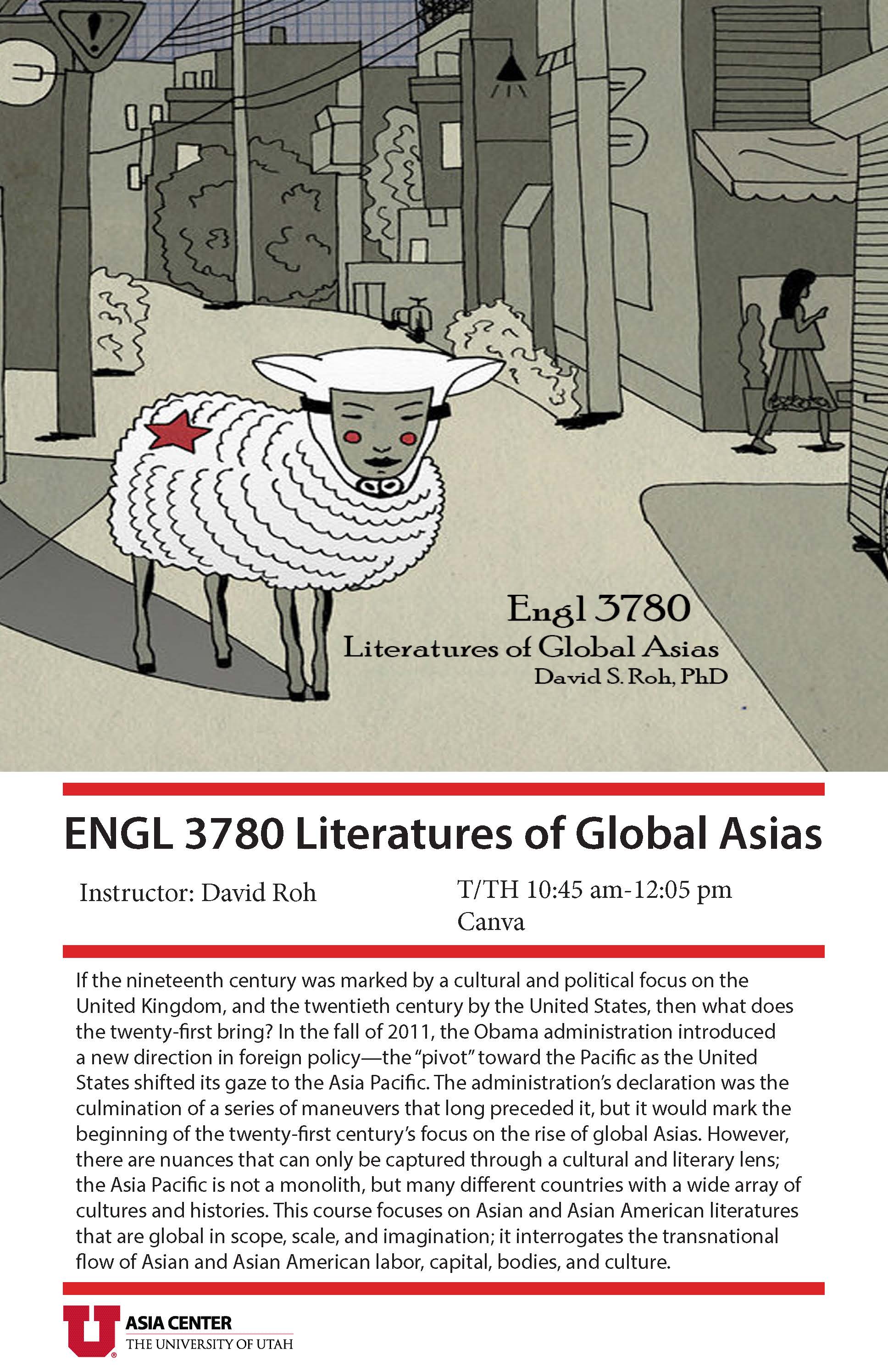 Instructor: David Roh
Days: Tuesday/Thursday
Time: 10:45 am- 12:05 pm
Location: Canvas
If the nineteenth century was marked by a cultural and political focus on the United Kingdom, and the twentieth century by the United States, then what does the twenty-first bring? In the fall of 2011, the Obama administration introduced a new direction in foreign policy—the “pivot” toward the Pacific as the United States shifted its gaze to the Asia Pacific. The administration’s declaration was the culmination of a series of maneuvers that long preceded it, but it would mark the beginning of the twenty-first century’s focus on the rise of global Asias. However, there are nuances that can only be captured through a cultural and literary lens; the Asia Pacific is not a monolith, but many different countries with a wide array of cultures and histories. This course focuses on Asian and Asian American literatures that are global in scope, scale, and imagination; it interrogates the transnational flow of Asian and Asian American labor, capital, bodies, and culture. 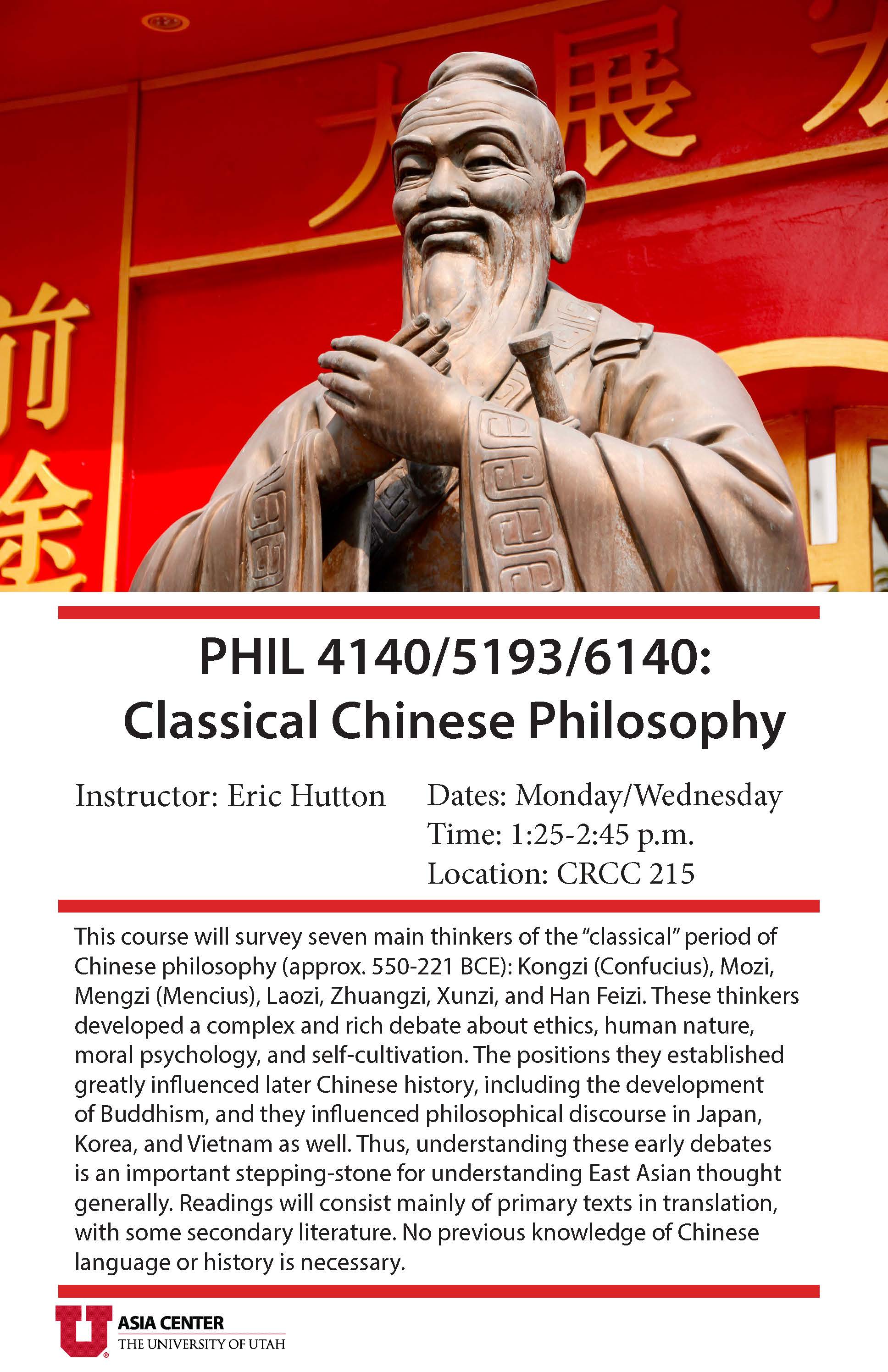 This course will survey seven main thinkers of the “classical” period of Chinese philosophy (approx. 550-221 BCE): Kongzi (Confucius), Mozi, Mengzi (Mencius), Laozi, Zhuangzi, Xunzi, and Han Feizi. These thinkers developed a complex and rich debate about ethics, human nature, moral psychology, and self-cultivation. The positions they established greatly influenced later Chinese history, including the development of Buddhism, and they influenced philosophical discourse in Japan, Korea, and Vietnam as well. Thus, understanding these early debates is an important stepping-stone for understanding East Asian thought generally. Readings will consist mainly of primary texts in translation, with some secondary literature. No previous knowledge of Chinese language or history is necessary.